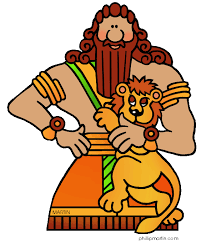 What many believe to be the likeness of Gilgamesh.

I think Gilgamesh is an incredible story, my print version from the Norton Anthology of World Literature is easy to follow. However, there were major details missing that I had to look up. For example, none of the female characters seemed to have names. I had to look up the name of who was being referred to as the “Goddess of Love” (to become Gilgamesh’s wife in part 1), and in addition, who was being referred to as “the harlot”, who actually plays a crucial role in bringing Enkidu in union with the world of Mankind. The former appears to be named “Ishtar”, and the latter woman appears to be Shamhat.

I make no scholarly claims with my synopsis of part 1 that appears below. Think of this blog posting as kind of like part of a World Antiquities Amateur Hour.

Gilgamesh is the king of Uruk (imagine Iraq in the Bronze Age, around 2500 BC). He is a bit of a jerk. He seems to feel that all the women of the kingdom are at his disposal for his sexual pleasure, married or not. He also takes boys from their families as recruits for his army.

There is a wildman, Enkidu, running around the forests and lands outside the kingdom, living among the wild animals. As any street kid would tell you, no kid ever chooses the street. Enkidu’s situation was worse than the street. He was in wilderness, competing for food with gazelles, tigers, and other wild beasts, living on nothing but grass, not able to care for much more than himself. Kind of like Gilgamesh. It’s not Enkidu’s fault that he is a wildman. Enkidu was flung like a piece of dirt into a random wilderness area by his creator, the goddess Anu, and Enkidu just had to cope. That’s got to be pretty hard. Living on grass, no friends, no school, no PlayStation.

Enkidu is kind of cool for anyone who believes in animal rights, since he destroys Gilgamesh’s traps set up for wild animals, and lets any animals already trapped to escape. Gilgamesh may be the King of Uruk, but Enkidu has the rest of the animal kingdom on his side. While Enkidu seems to be a bit of a small-scale troublemaker, Gilgamesh realizes that Enkidu may well have the same God-like powers as he, so while he wants Enkidu brought to him, he does not want to do it in a way that would rile him if captured.

What follows is the first use of the Tender Trap known in world literature. How does one capture a wild man whose fighting powers compete with your own? You don’t fight him. You give him an offer he can’t refuse. Gilgamesh probably guessed correctly that Enkidu hadn’t had any sex throughout his whole life, and has a lot of pent-up sexual energy that has never been channeled properly, because he may never have been in bed with a woman let alone actually ever seen a woman. So, Gilgamesh has an idea.

Get a trapper to bring with him, as a “trap”, a hooker from the cathouse down the street. It would have to be a hooker who is attractive-looking, with some gentility and patience, since Enkidu has never “done it” with a woman before, and he would otherwise be all awkward and clumsy. Shamhat the Harlot was recruited to, upon meeting him, take her clothes off at no provocation, and use her feminine wiles to get him to “do it” with her.

Oh, they do it all right. For seven whole days. And this was several thousand years before the invention of Vaseline. The story also makes it unclear as to whether they even had meal breaks. And my dad always warned me never to fall in love with a piece of tail. Since Enkidu never had a dad to listen to like that, he blew it forever by telling Shamhat he loved her. The animals of the animal world, as if they were jilted, now rejected him. His one-ness with the animal world was broken. Reduced to common humanity, his only hope now was to make whatever connections he could with the world of man. Maybe start by getting a haircut.

Shamhat sensed that Enkidu was not too clued-in about life inside the walls of Gilgamesh’s kingdom. Enkidu had that bravado about surviving the wilderness that a person who survived the street would have. He’s all like: “Bring on Gilgamesh! There’s nobody stronger than me! I’ll panel him to the ground any day!” And Shamhat’s all like “Don’t boost. Gilgamesh is moody and will become angry at the least excuse. He is also 2/3 God and 1/3 man. You don’t have a chance.”

Meanwhile, back in the Kingdom of Uruk, Gilgamesh had been waking up from disturbing dreams. They didn’t have psychiatrists 25 centuries before Christ, so Gilgamesh went and told his mom about his dreams. His mom said with clinical detachment, I think the imagery in your dreams, coupled with your excessive closeness to your mother (referring to herself in the third person) indicates latent homosexual impulses. You are going to meet up with some guy and he is very strong, and you will become drawn to him as if he were a woman, and he will be loyal to you.

Shamhat led Enkidu to the part of the kingdom where Shepherd’s tents were, and knowing that the Wildman had arrived, the shepherds offered Enkidu their best bread and wine and laid it before him. He thought meh! and felt like going back outdoors to run up to a wild female animal and suck milk from it like he always used to. But Shamhat pussy-whipped him into staying and respecting the customs of the kingdom. He drank the wine and ate the bread, and got plastered.

Then a messenger comes into the tent bearing news that Gilgamesh is about to marry Ishtar, the Goddess of Love. Then, upon hearing Gilgamesh’s name, Enkidu becomes enraged again. It was probably the liquor that triggered the rage, but now he goes to find Gilgamesh, and Shamhat follows him out of the tent. Now, Gilgamesh will meet his match, people thought as they recognized Enkidu when he passed them in the street, and we will be rid of this arbitrary ruler once and for all. Enkidu finally met Gilgamesh, and blocked his way, which you never do with a 2/3 deity. There were no words exchanged. Just men doing what men must do. They fought like bulls, and Enkidu was thrown. In the end there were no winners, and the fury of both were spent. Each realizing that the fight ending in a draw, they became bff’s.

(With pictures from wherever, scattered all over the ‘Net)